This follows the submission of one Olumuyiwa Igbalajobi, a Nigerian postdoctoral research fellow in Canada, who wrote to the university requesting an exemption of Nigerian students from the list. 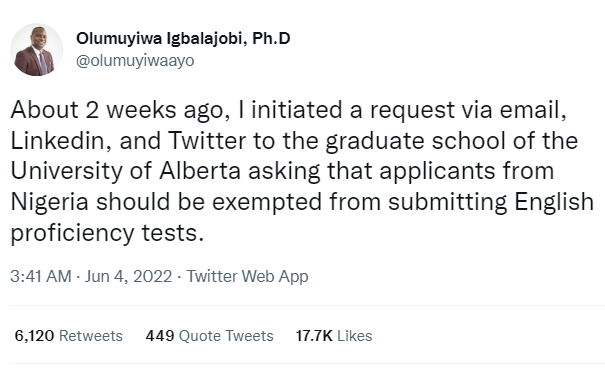 Mr. Igbalajobi had on May 22, emailed and tweeted at the university’s official Twitter handle, calling its attention to a list of select universities from Nigeria that meet the institution’s English language requirement.

He added that “the official language in Nigeria is English which automatically translates to the fact that all academic programs from elementary to tertiary education are taught in English, hence Nigerian students should be exempted from the test entirely and not some select schools.

Following his submission, the university noted that Mr. Igbalajobi’s email raised an important issue of discrepancies between ELP exempted countries as listed across Canadian post-secondary institutions. The university eventually gave its approval.